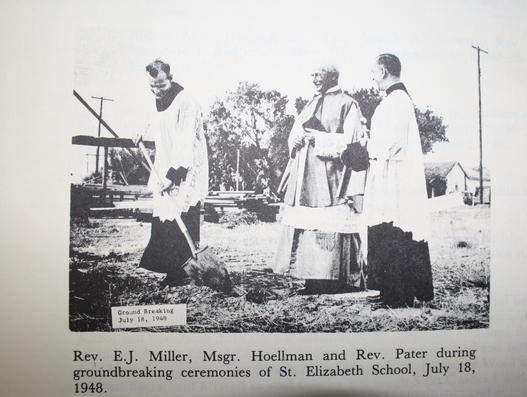 In 1946, Father E.J. Miller, pastor of St. Elizabeth Catholic Church, announced the launching of a building program by his parish for the erecting of an elementary school and auditorium on church property.  The proposed building would have five classrooms, a library, a teachers' office, and a medical clinic.

In 1948, groundbreaking was held for the school, auditorium, and rectory.  Construction plans called for the three units to be completed and ready for occupancy in the Fall of 1949.

In 1949, the school was opened and solemnly consecrated to the Sacred Heart.  The school was staffed by the School Sisters of Notre Dame and in 1957 the first lay teacher was added to the staff.

In 1958, a school cafeteria was opened to serve students and staff. As the years went on, classrooms were added and lay teachers were hired.

St. Elizabeth School has a School Advisory Council that works in unison with the principal and pastor to provide a Catholic education where we educate the whole student.